My high school friend Sarah was in town Friday and Saturday, bringing along her friend Dominique, who had never been to Boston. The plan for Saturday, therefore, was to fit in as much touristy stuff as we could and show Dom the town.

After a trip to Regina's on Friday, we were driving along when we heard a commercial on the radio talking about "day-cations." If "stay-cations" were all the rage last year, it seems "day-cations" are this year's trend. But we soon realized that the ad was for Mobil's convenience store, On The Go, and their "day-cation" deals. Seriously? Because if I only had one day off to relax, I highly doubt I'd be hanging out at my local Mobil station...

Anyway, we crammed a lot into Saturday, and hopefully, Dom got a lot out of Boston. It's always fun to play tourist in your own town, and the weather couldn't have been better for it. We walked over 7 miles, proving that Boston really is a walking city. 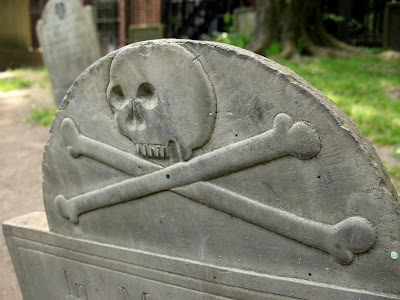 After picking up our friend Kristen, we started by strolling down Charles Street, ending at the Public Gardens for a Swan Boat ride. I miss the days when everyone would be dropping bread off the sides so that the boat was just trailing ducks as it glided along.

From there, we started the Freedom Trail, making a stop at the Granary Burying Ground. There was a guy handing out pamphlets about some of the famous inhabitants of the cemetery, including Mother Goose and Samuel Adams. I had a good time photographing the tombstones - I did some research in college about the motifs on New England tombstones, and I think it's fascinating how the imagery changed over the years. 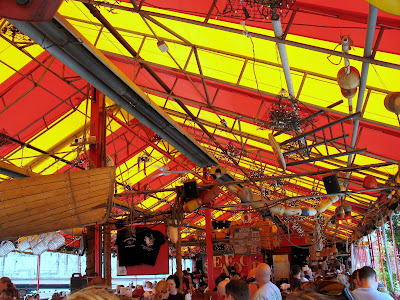 We stuck to the Freedom Trail for a while, then split off to wander through the financial district over to the waterfront. We grabbed lunch at the Barking Crab, which has fun ambiance but just ok food. It's loud and crowded, but when the weather's nice, it's always great to sit on the water and enjoy a beer and some fried food. 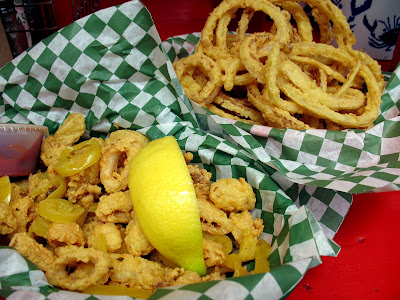 I hadn't been to the Barking Crab in years, though, and was surprised at how limited their menu was. I was expecting all kinds of fried food baskets, but all they offered was fish and chips and a fisherman's platter. So I ordered off the appetizer menu instead, choosing calamari and onion rings. The Rhode Island-style calamari was decent, with almost no chewy pieces, but the peppers were too wet and turned a lot of the basket soggy by the end of the meal. I always prefer when the hot peppers are battered and fried as well - the texture matches the calamari a little better. The onion rings, on the other hand, were delicious - light and ultra crisp, well-seasoned and thinly sliced. I might have been happier just eating the onion rings...

After lunch, we wandered down the Harborwalk to the aquarium, where we got on a harbor cruise. For 45 minutes, we soaked up the sun as we sailed in a big circle, viewing the coast of South Boston, East Boston, and Charlestown. I even got to wave hello to the USS Constitution, where I worked last year.

As we disembarked on Long Wharf, The Landing was right in front of us, and we were lured in by the hordes of people drinking from plastic fish bowls. The four of us shared the giant drink as we took in the surroundings and enjoyed the sun a little more. Long Wharf is always a mob scene, so it was nice to have a little piece of real estate to ourselves from which to watch everything going on. And for $25, our fish bowl wasn't outrageous - we probably would have paid more if we had each gotten our own drinks. The bowl was a little fizzy and tasted exactly like the blue ice pops that we all enjoyed as kids - mmm blue! 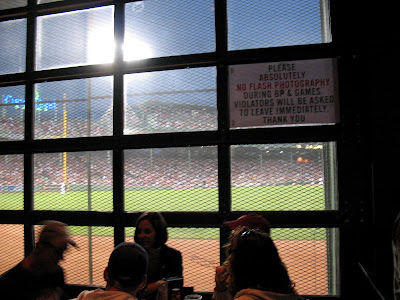 Slightly tipsy, we wandered through Quincy Market, over Beacon Hill, down Commonwealth Avenue, and over to Fenway. We ate at Boston Beer Works (after an earlier discussion about sweet potato fries, it seemed like an obvious choice), then headed over to the Bleacher Bar for drinks. What a cool space! The bar is at field level, looking right out onto the warning track. If you're lucky enough to snag one of the tables, you can see all the way to home plate.
The men's room even has a window at eye level so the guys don't miss one pitch. I'm looking forward to heading back to watch another game (and hopefully actually grab a table at some point).

Lunch at the Barking Crab got me thinking, though - there really aren't a lot of places to get clam shack-type food in Boston itself. Anyone have any suggestions for good (cheapish) seafood?

There are some great clam shack places in Wollaston if you feel like trekking down there. We had Memorial Day lunch at the Clam Box (or shack?) and it was really good! There is also an amazing place in Ipswich, also the Clam Box I believe. Long lines, but worth the wait!
Bleacher bar looks fun. I had no idea it looked on to the field!

Thanks for the suggestions! I usually head north to places like Ipswich. I was wondering more about places downtown (like Barking Crab, but, you know, better...). I'll have to head down to Wollaston to try some of the good stuff down there!

Hmm. Your post got me thinking - I have never done the touristy things in Boston. Didn't do them even when I was a tourist. Might have to try it. :)

Really, Adele? I'd be happy to help resolve that for you :) We could turn it into something of a chow crawl....

uhummm....may be somewhere in the North End- they do have good seafood. Will try to search something up.
Summer lures in a lot of old friends for the prefect weekend in Boston- your tips are going to come in handy. Thanks.

Kelly's on Revere Beach for fried clams and other fried seafood. Best show in food and people-watching!