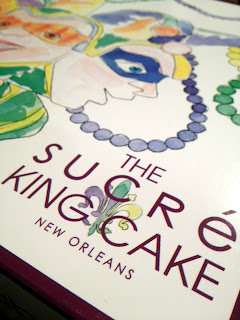 I had never had a king cake until a few years ago, when my friend Ann (who went to college in New Orleans) decided that we should try making one. It was a huge success (thanks mostly to Joanne Chang's brioche recipe from her Flour cookbook), but I didn't have much to compare it to.

But when Sucre Bakery asked me to try their king cake, I jumped at the chance. A real king cake, straight from New Orleans? Yes please!  (Here's some history on the king cake if you don't know it.) 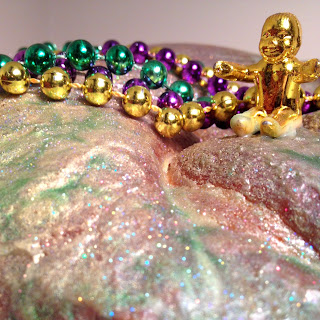 I had a hell of a time getting a good picture of Sucre's king cake because it is just too beautiful. Coated in edible glitter (the ONLY kind of glitter I'll stand for) in traditional Mardi Gras colors, this cake will not allow decent pictures to be taken. But in person, it's gorgeous! It would make a stunning addition to a buffet or as a centerpiece (but we just ate it with our hands straight out of the box).

And the taste? Oh so good! I was a little worried about it having a cream cheese filling, but in truth, the cream cheese is very light and not at all cloying. In spots, it was almost absent, while in others, it was a bit thicker. The dough itself is light and chewy, like a perfect breakfast pastry. We enjoyed some of the cake at room temperature, but we also heated some for a few seconds in the microwave (as suggested by Sucre) and that was even better! In fact, I'm drooling just thinking about it.

I was worried that a king cake shipped from the land of Mardi Gras would be crazy expensive, but Sucre's cakes are only $20, so even with shipping, it would hard to find anything in the Boston area at a comparable price (not to mention the taste!). But they only make king cakes from January until Mardi Gras (which this year is only a week and a half away!!!), so order now!

Full Disclosure note: I was sent samples for free by Sucre, but the opinions are all mine.
Posted by Pam at 12:57 PM

Pam was nice enough to share this with me. I have to say having lived in New Orleans this is one of the best King Cakes I've ever tasted. I might actually order one for Mardi Gras