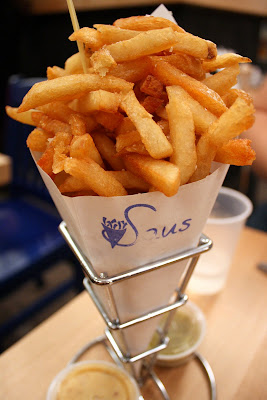 I've been following the saga of Saus for months now, and when the little frites-shop-that-could opened about a month ago, I was ready and raring to try them out. Of course, I couldn't actually make it downtown for a bite until this past week, and I'm kinda kicking myself that I didn't get down there sooner. Simply put, I'm in love.

Saus, purveyor of Belgian-style fries and waffles, has been the talk of the Boston food blogger world all month, and I'm sure I'm just adding one more positive review to the bunch. From it's clean atmosphere, dusted with old-school European comics, to its alluring menu of dipping sauces (both savory, for the fries, and sweet, for the waffles), this place is very promising. Hopefully their location (near Faneuil Hall) and their late hours (2am on weekends) will lead to lots of success.

Now on to the actual meal. I went with a friend, and we shared a cone of fries and an order of poutine for dinner. We chose the Green Monster (habanero, jalapeno, cilantro, garlic) and the Bacon Parm (um, just what it sounds like) for dipping, and after listening to us vacillate over choices (and talking to him about my chicken tortilla soup), Chin (one of the owners) brought us some samples of the Cheddar Duval (cheddar and Belgian ale), Vampire Slayer (garlic, garlic, garlic), and You're My Boy, Bleu! (bleu cheese) to try as well. Each sauce was completely unique, and the ingredients used are clearly of the highest quality. The Green Monster was just spicy enough and really bright from the fresh ingredients (I used the leftovers the next day as salad dressing, and now I'm wishing I had a bottle of the stuff in my fridge). The Cheddar Duval was just like fondue, and the beer taste was pronounced but not overwhelming. I'm not a fan of bleu cheese, but they get points for the name on that one. Big points for the Vampire Slayer title as well, and the well-rounded flavor of roasted garlic made that one a winner (although you have to make sure that the people you're with eat it as well). And Bacon Parm? Magic. The shop also makes their own ketchup and mayo from scratch.

Our order of poutine was fantastic, too, and since I've never had it in Montreal, I can't comment on how faithful it is. My friend, however, commented that it was better than any she'd had in Canada, so I'm guessing Saus is holding their own on poutine. Chin suggested dipping the poutine in the Cheddar Duval sauce for another added level of deliciousness, and man was he right. 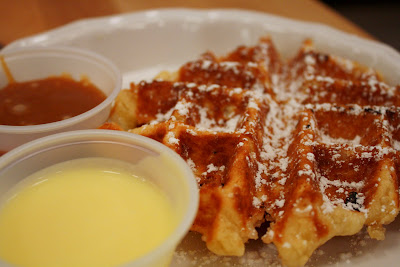 We waited a little while before ordering a waffle to share. The authentic Liege waffles are made with pearl sugar and are smallish but dense and more than enough, crispy on the outside and soft in the middle. We chose the lemon cream (like a thick and creamy limoncello) and the salted caramel (which I, no joke, was scrapping out of the dipping cup with my fingers at the end of the meal). Saus also makes their own Nutella (!).

All I can say is that I'm glad that it's a hassle for me to get to Saus. If I lived or worked nearby, I would easily be another 100 pounds heavier, because I would eat there all the time. Chin, I'm only partially kidding about moving in...

(Also, could I have used more parenthesis in this post? (Probably.))

The next time I have plans to be in town, this is going to be my first stop off the plane.

I still haven't tried the poutine at Saus but I love their waffles and frites!

I so want to go there. This sounds like fatty mcfabulous food. Yum!

their fries are amazing. and all the sauces.
pure heaven!

Adele, I'll meet you there ;) And Erin, I'll drag you there one night.

I'm so glad to see all the love out there for Saus, from bloggers and non-bloggers alike!