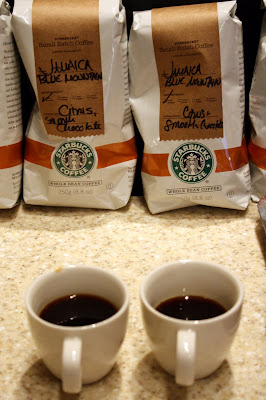 I know a lot of people who are big into wine, and they can converse on the topic for hours at end. Me, I like wine just fine, but I often have a hard time placing flavors, and due to a bad experience with red wine in Italy, I usually just stick to whites.

There are plenty of other drinks, however, that I can get behind, and coffee just happens to be one of them. I could be a much bigger coffee geek if I had the money and time, but for now I'll settle for knowing what I like.

So when Starbucks invited me to try the Jamaica Blue Mountain coffee that they released this week, I jumped at the chance. JBM is a rare and expensive coffee with a short growing season in a specific part of Jamaica. Starbucks has only offered the beans twice in their history - once in the '70s and once in the '80s. This time around, they are only releasing the beans to stores with Clover brewing machines. And of the 50-something Clovers in US stores, Boston has about 30 of them (!). Starbucks sees Boston as a leading city in coffee culture, and the Clover has become a popular feature in local stores.

OK, onto the coffee itself. I like coffee brewed on the Clover because it's as fresh as you can get at Starbucks - beans are ground fresh for each cup, and the brewing process extracts flavors that can't be achieved through regular paper filter-brewers. And this coffee was, no joke, the smoothest cup of coffee I've ever had. I usually like to doctor up my coffee with Equal and milk, but this didn't need anything to help it along. It was almost sweet all on its own. The bag notes hints of citrus and chocolate, and those flavors were definitely there - citrus first, then more chocolate as it cooled. I tried it paired with lemon pound cake and chocolate brownie, and I thought that the combo of lemon cake and coffee was outstanding.

Jamaica Blue Mountain is available in Starbucks with Clover machines until August or the supply runs out. A grande will set you back about $5, but if you think of it in terms of other fine drinks like wine, it's actually a good bargain. You can also buy beans in-store to brew at home. I can't wait to try cold-brewing at home to see what additional flavors I can taste. (Note: If you've never tried cold-brewing coffee, now is the time. It seriously pulls out flavors that aren't there when coffee is hot, plus it has more caffeine! I use my French press for easy cleanup, but you can follow the directions I posted previously if you don't have one.)

Full Disclosure note: Starbucks provided me with samples of JBM.
Posted by Pam at 10:04 PM

I LOVE COLD BREWING - so great, especially in the summer for a pick me up. The best part of my french press :-)

JBM coffee is outstanding, but I have to say Starbucks' blend is not the best out there. This is some great stuff I found in Chicago, http://tinyurl.com/y85tz7v