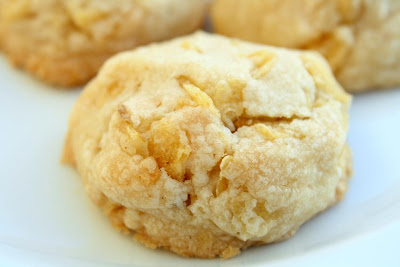 I spent the last weekend in March at a fantastic non-food-related event and came home with a desire to bake. Strange? Not if you've met me.

PAX East (the East Coast offshoot of Seattle-based PAX) was host to 50,000 gamers (video games, tabletop games, board games, pretty much anything and everything) at the Hynes Convention Center, and for three days, I was surrounded by fellow geeks (in fact, I found myself on the "casual" gamer end of the spectrum amongst this group). I took some embroidery with me to keep me occupied while we waited in lines (I don't have a Nintendo DS, which seemed like the most common thing people were using in line, so this kept me busy).

On Saturday morning, while waiting in line for a panel with Foxtrot author Bill Amend, a guy walked through the crowd with a bag filled with little tin-foil-wrapped goodies, taking donations for Child's Play and handing out cookies. He was part of what I later learned is called the Cookie Brigade. I handed him a donation and he asked what I wanted.

"Experimental? Sure, why not," I told him, and while my friend dug into a serviceable chocolate chip cookie, I quickly unwrapped a golden cookie studded with little flecks of what looked like corn flakes.

But those were no corn flakes. Instead, they added a nice crunch to an otherwise crumbly shortbread and a healthy dose of salt to something that was fairly sweet.

"Potato chip cookie!" I called out, and there were "oooh"s of interest from those around me. 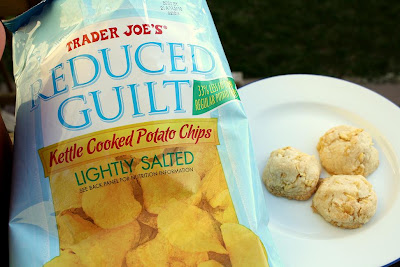 So a few days after the con ended (I needed some time to recuperate!), I started searching for potato chip cookie recipes. Most of what I found included pecans, but the one I had included no nuts, and frankly, was better for the omission. I jury-rigged my recipe from the ones I found to be more like the one I ate at PAX, and I'm convinced that this is pretty close to that cookie.

I used Trader Joe's Reduced Guilt potato chips because, despite saying "lightly salted" on the bag, they are one of the saltiest chips out there (they're also not greasy, which is a plus). They are my second favorite potato chips, but my favorite (Cape Cod Potato Chip's Robust Russet) are very dark in color and I thought they would look burnt in the cookies. This is a great way to use up the chip crumbs at the bottom of the bag, so feel free to use whatever you have on hand.

These cookies are great with just the chips, but they're even better with a little bit of chopped chocolate. I tried them with both milk and dark chocolate, and I think I liked the milk better.

Cream together butter and powdered sugar. Add vanilla and mix until combined. Add flour and and mix until completely combined. Add crushed potato chips and chocolate and mix until incorporated. Roll dough into walnut-sized balls (use your best Ralph Wiggum voice to say "These cookies give my hands ouchies!") and place on a parchment-lined baking sheet about an inch apart. Bake for 15-17 minutes, or until golden. Cool on a baking rack before serving; store in an airtight container.
Posted by Pam at 1:49 PM

i've made a comprable cookie with rice crispies and sharp cheddar cheese. totally my favorite. =)

Are you kidding me? These sound amazing. I think I might have to try them.

Ooo, Becca, those sound good too :) Maybe a combo of cheddar and potato chips?

The best part about these cookies? They take all of 10 minutes to mix and shape, and then you just have to wait for them to bake up!

These look incredible! Reminds me of the bacon/chocolate duo - nothing beats the salty and sweet combo.

I want to go to there

Michelle, you're so right - it is just like the bacon/chocolate combo (which also work well in cookie form)

Adrian, Liz Lemon would agree with you...

Ooh. I used to eat banana and potato chip sandwiches as a kid... could I add jam to these?

I Am Gluten Free said...

Michael's makes a certified gluten free potato chip. Must try these cookies - so easily gluten free and naturally gluten free if I used Earth Balance. Thanks for the recipe and your efforts, from another Boston-area (well, actually central Mass.) blogger.

P.S. How lucky are you to live fairly close to Penzey's Spices???!!!

Ellen, aren't potato chips and butter naturally gluten-free? It's the flour that needs to be changed out...

I’ve found myself here several times before while searching various things. I appreciate the detailed articles you write, and in some cases this is the ONLY place I can even find them.

Potato Chips is very easy to use where you can prepare many different snacks without taking much of your time. Being very popular it is used widely in the different countries. The best part is that it helps in preparing the Potato Chips in the spiral frame that not only makes it look very interesting and beautiful but also makes it very tasty as well.
thanks
Potato Chips

Thank you for sharing this amazing information with us. Shoppa.in can provide you the top Indian manufacturers & suppliers to buy products online. Get all the products directly from Indian wholesalers & suppliers. Some of our products are Pathani Kurta Pajama, fish cut lehenga, baby cradle automatic swing, Indo western toilet seat, Kamar Patta, etc.