Tourshi, or How It's So Easy to Always Have Salty, Crunchy, Healthy Snacks on Hand 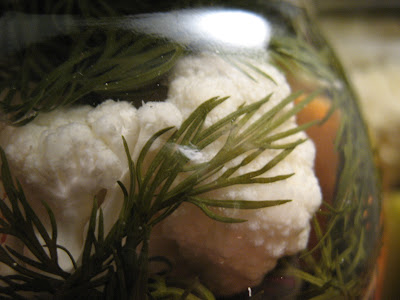 Yes, I know canning is something that's usually done in the late summer/early fall, but when am I ever together enough to do something like that on time? As soon as classes ended last semester, I started in on making some gifts for friends and family, and the first thing I thought of was tourshi.

Tourshi is an Armenian recipe for pickled vegetables, traditionally with carrots, celery, cabbage, and cauliflower. My father used to tell me about the giant vat of the stuff that his parents kept on their back deck and how cold the brine would get in the winter when he went to sneak a snack. When I was a kid, it was something we only had occasionally, usually after a visit to the church bazaar. And tourshi was probably the first time I had cauliflower, and for many years, it was the only way I would eat it. A few years ago, when I got into a kick of basically opening the church cookbook up to a random page and making whatever sounded good, I finally tried my hand at tourshi - and it was so stupidly easy, I couldn't help but wonder why we hadn't been making our own all along. The hardest part to the whole process is cutting the vegetables into chunks and arranging them in the jar (and looking at my pictures here, it's clear that I didn't do the best job with packing). 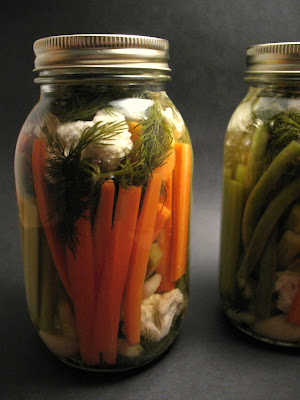 
Arrange 6 quart-size (wide-mouth preferable) canning jars on the counter or table. Place two garlic cloves in each (more if the cloves are small) along with a few sprigs of dill and a few peppercorns. In each jar, tightly pack in cleaned and cut vegetables until the jar is full. Top with more dill sprigs and a few more peppercorns.

In a large pot, bring water, vinegar, salt, and sugar to a boil, stirring to dissolve the salt and sugar. Carefully ladle the brine into each jar (a small funnel is very helpful in this) and seal with clean lids. Store in a cool place for at least two weeks, and refrigerate before serving.

Also, once you've eaten everything in the jar, you can just throw in a few more veggies to get a second life out of the brine - they won't be as intense as the first round, but they'll still be delicious and salty with very little work.
Posted by Pam at 3:32 PM

That really looks delicious. I'd like to invite you to take some time to drop by at Foodista and share your delicious recipe with us. We have launched an online food and cooking encyclopedia ala wikipedia. Add a recipe and you can win a $100 gift card to Sur la table. Don't forget to register first so we know who to thank the recipe for. Thanks!

Pam have you ever tried using asparagus? My brother and I have been contemplating what other veggies we can try turning into tourshi! :)

Lisa, I think asparagus would work really well. I was considering putting some in, but my father vetoed their addition :) One thing I love about this recipe is that it costs next to nothing, so you can try as many things as you can think of. Let me know how the asparagus (and any other veg you try) turn out.